“The deep wisdom and loving compassion I have experienced here
have been an inspiration, a comfort and a guiding light.”

Swamis and the Swami Orders

The members of the Sivananda Yoga Centre who wear orange clothes are ‘swamis’. Traditionally, we address them as ‘Swami’ or, with affectionate respect ‘Swamiji’.

The word ‘swami’ means ‘one with the self’ and often refers to a sannyassin (renunciate) of the ten-branched order of monks and nuns founded by Sri Shankara circa 400AD.

Disciples of Shankaracharya established four maths (monastic institutions) at, respectively: Joshi in the north; Sringeri in the south; Puri in the east: and Dvaraka in the west of lndia. Each math under a pontiff with the title Jagatguru Shankaracharya. The Shankaracharyas’ duties are to teach from their comprehensive knowledge of the scriptures and provide counselling if or when consulted by Dasanama (Ten-name) Swamis connected to their maths, Each swami has access to the same math and has the same agnomen as the swami who initiated him/her into the order. These names set out below their respective maths are: 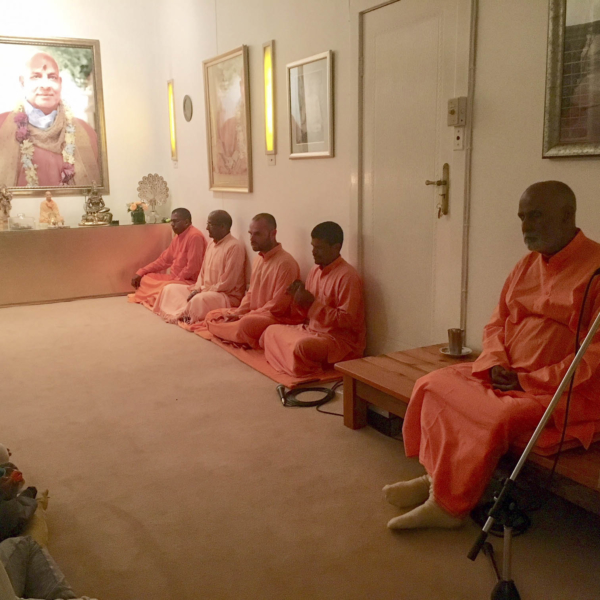 Visiting swamis to the Sivananda School of Yoga, 2017

Only a Dasanama Swami can initiate into the Dasanama Order: a Saraswati can make only Saraswatis: a Giri only Giris; etcetera.

The preparation for sannyas includes essential education in Sanatana Dharma (Hinduism), instructions re conduct and duties, disciplinary training, and a careful assessment of the candidate’s suitability. At the outset, the candidate must be widowed, or unmarried and single. Being a monk or nun, a sannyassin cannot ever be married.

In many of the institutions run by sannyassins, formally initiated monastic brahmachari(ni)s wear the yellow robe, in the Divine Life Society they have the agnometi ‘Chaitanva’.

There are two main kinds of swami, whether Dasanama or of another Hindu order:
Jnana Sannyassins – elderly or widowed Vanaprastas, not of the ten-branched order, who renounce during a public Viraja Homa (Fire Sacrifice)

Dasanama Sannyassins – single persons who are initiated by their senior swamis. with or without Viraja Homa.

The title ‘Paramhansa’ does not refer to an order or rank within an order but is a subjective recognition of attainment by admirers.

The initiator of a swami must receive the initiate into the order while physically present in person at the ceremony, or in writing or other visual evidence for public announcement and scrutiny.

At initiation the swami is instructed in certain mantras which must henceforth be recited daily in addition to the usual vedic prayers in Sanskrit. From this religious, occult and mystical rite, there emerges a being who is no longer of this world.

The swami wears gerua (orange cloth) to represent the embers of a cremation fire. What has come forth from the fire is a being whose blessings and prayers are regarded as especially effective because they are presumed to express God’s will. In the absence of murtis (images; icons) the swami’s body may be used for puja (ritual worship) and arathi (light waving ceremony). His personal effects are protective talismans and whatever food is proffered to him/her becomes prasad (sanctified nourishment).

The swami’s name. often with the suffix ‘ananda’ (bliss of) is at appellation of deity or some spiritual quality, state, experience or practice.

The swami’s inner duties are ahimsa (harmlessness) and meditation. His outer seva (service) is mainly teaching, spiritual guidance, intercessionary prayer, satsang, and the offering of whatever spiritual gifts manifest themselves through his/her person. He should avoid referring to his pre-monastic state but, whilst free from attachment himself he should be a counsellor and comfort to others in their mental-emotional disturbances and bereavements.

When a swami dies, funeral rites are unnecessary – the body was symbolically cremated at sannyas diksha (initiation) and (ideally) the swami has not identified with a physical form. Therefore, the body is simply committed to the Ganges or summarily buried or, for convenience, cremated without ceremony and the ashes scattered without trace.

Other orders of sannyassins include:
Udasis – a Sikh order founded by Srichand, son of Guru Nanak.

Yatis – a Jain order with two groups: Svetambaras who wear white, and Digambaras who are nude.

Kabir Panthis – who follow the teachings of Kabir, in twelve groups.

Nagas – nomadic worshippers of Lord Siva who are nude.

RamaSanehis – founded by Ramcharan in l718 in Rajputana, in two groups:
Mohinis who wear red, and Videhis who are nude.

Parinamis – founded by Sri Parinnath in 1675 at Jamnagarh near Rajkot; they study his teachings and worship Balakrishna.

Monks and nuns of Buddhist and Lamaist orders.

N.B: Please note that the term “Swami” has sometimes been applied rather loosely in the west. The only swamis are those whose initiations, disciplines and lifestyles conform to the patterns and descriptions given above. Once initiated, there is no return to pre-monastic life.