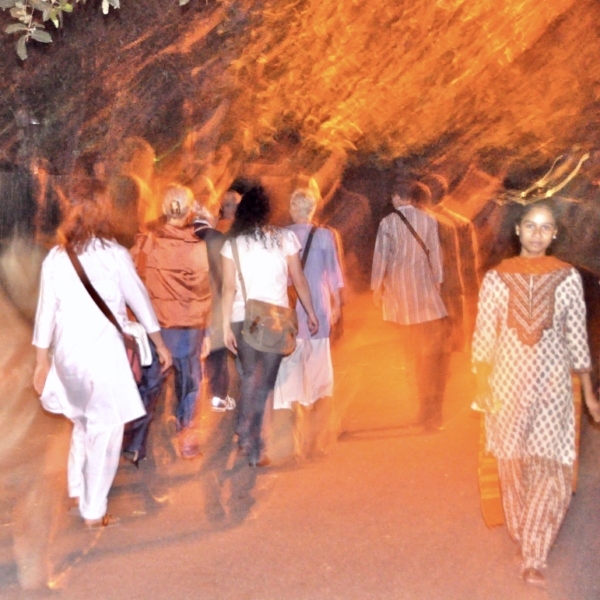 Members of the Sivananda School of Yoga in Delhi

Transcending Religion: A manifesto based on statements by Manly Palmer Hall

Our yoga centre offers enlightenment in the form of the eternal verities as shrined in the Scriptures, and in the ways humanity has ever received Divine guidance and revelation; that is in meditation and by the response to prayer of liberated souls who by virtue of their evolution, purity, love, wisdom and clarity of perception, offer themselves as our spiritual preceptors.

Transcending religions, the philosophy of the masters renders life intelligible, and demonstrates the love and justice which guide its birth and death in true perspective, as recurring incidents in eternal life, and opening gateways to fuller expression and more radiant existence. It encourages man to recognise the Spirit as the Divine Indweller, and to know the mind and body as servants of the Spirit. These investigations illumine the sacred

Scriptures by unveiling the spirit of their doctrines, thus justifying their esoteric meanings at the bar of intelligence; as they are ever perceived by intuition.

We are bonded, not by a creed or scripture, but a common aspiration for Truth. We believe that revelation is ongoing, in according with the individual’s ever-increasing capacity to receive, and facilitated by prayer, meditation, personal purity, charity and service, devotion to high ideals, and information imparted by masters. Recognising that truth is no respecter of beliefs, scriptures, masters or religions, we are free of dogmas, creeds, rituals, ceremonies, fasts and festivals, all of which we regard as containing parables and symbols, while the ignorant take them literally and so imprison themselves. They consider condemned all who will not join them in the dungeon. Before the vision of the seer, dogma, myth and legend dissolve and fade, and he/she sees behind them the realities they represent.

The true member is not creed-bound. He can bow before every altar, whether in temple, mosque, synagogue or cathedral, realising with his truer understanding the oneness of Truth. He knows that religions are but one story told in different ways to peoples of different history, culture and receptivity. The aspirant cannot be narrow, for there is no place for small minds in a great work.

What is a true aspirant? — A woman or man whose heart has been duly and truly prepared; who has been found worthy for admission to the company of God-serving seekers, and invested with the secret of the Word by which he/she may be enabled to complete the great work and attain God-realisation and liberation.

In ancient times many years of preparation were required before a neophyte was permitted to enter the temple of the mysteries. In this way the faint of heart and those unable to resist the glamorous attractions of life were barred from initiation. Only those are true who enter in reverence; who seek the treasures which are eternal above the ephemeral things of life; those whose foremost desire is for enlightenment.

Each member must know that failure to live mentally, spiritually and morally up to one’s highest ideals constitutes the real breaking of oaths. He/she must realise that a misdirected life is a broken vow, but daily service purification and the constructive application of energies is a living invocation of the angels who help them to become drawn to the Creator. If, having espoused high ideals, any member defiles the living temple thought the perversion of mental power or physical energy, he is breaking vows which impose not hours, but ages of misery. If he is to be worthy, he must be great enough to restrain the lower side of his nature. The quality of his life is his password to higher spiritual progress.

Within each of us lies a sense which may remain latent for many lifetimes; but eventually there comes a yearning for true happiness, when, having discovered that worldly pleasures are eternally unsatisfying, we examine ourselves and begin to realise that there are greater reasons for our being. Sometimes it is reason, sometimes suffering, sometimes a selfish desire to be helpful, that brings out the first latent powers which show that a longtime wanderer in the darkness is about to take the path that leads to light. Having lived many of life’s experiences, he has come to raise that every manifestation of his being, all the various experiences through which he passes, are steps leading in one direction; that consciously or unconsciously, all are being led to the portico of the temple where at last they realise the glory of their Divinity.

The profane mistakenly believe the Word to be holy write or a particular master. The secret of the true Word has never been concealed from those who have the right to know it, nor that it been revealed to any who have not prepared a worthy shrine to contain it. The Word will serve the aspirant when he has cleansed himself and his heart is pure. Initiates know that their work is not secret, but that certain spiritual qualities are necessary before the real secrets can be understood by the profane. All must build those qualities which will make possible their true understanding of the path.