“Serve, love, give, purify, meditate, realise;
Be good, do good, be kind, be compassionate.”

The following is only for advanced disciples, who live harmlessly,
and whose support of others’ charitable efforts should be in direct,
non-involved ways which do not spoil the disciples’ peace of mind.

As Pujya Swami Chidanandaji Maharaj has explained in his book ‘Swami Sivananda – Saint, Sage and God-man,’ Swami Sivananda made a distinction between advanced sadhana and social service. Most devotees are unfit for meditation, because their natures are not yet unselfish, so Gurudev prescribed selfless service as the principle element of their sadhana. He knew and stated that, “if you make a virtue your policy, eventually it will become your nature. “Consider, however, his placing of “be good” before “do good.” This instruction is for advanced disciples whose sadhana has rendered them naturally selfless, compassionate and charitable. Although such love-filled disciples will try always to meet the needs of the deserving destitute, because it is their nature to do so, they need no longer seek opportunities to be charitable or engage in charity pro-actively.

“A virtuous life only prepares the mind as a fit instrument for meditation. It is mediation that eventually leads to Self-realisation”
Swami Sivananda

‘It happened that during their travels they entered a certain village, and a woman named Martha received him into her house. And she had a sister called Mary, who also sat at Jesus’ feet and heard his teachings. But Martha was burdened with the serving and said to him, “Lord, don’t you care that my sister has left me to serve alone? Please tell her to help me.” But Jesus answered, “Martha, Martha, you worry and fret about many things, but only one thing is necessary: Mary has chosen that, and it shall not be taken from her.”
Luke 10: 38 – 42

‘A woman came to him with an alabaster box of precious ointment, and poured it over his head as he was sitting down to dine. But when his disciples saw this they were indignant, saying, “To what purpose this waste? For this ointment could have been sold for much and the proceeds given to the poor.” When Jesus heard this he said to them, “Why trouble this woman, for she has been good to me. For the poor will always be with you, but me you will not always have.”
Matthew 26: 7 – 11

“I don’t believe in charity…Charity enslaves people. To share your wisdom with others so they are enabled to help themselves is greater than any material gift.”
Paramahamsa Yogananda

“Moreover, remember that the pursuit of Truth for its own sake as the altogether lovely and desirable end of life is the highest aim of spirit on your plane of being; higher than earth’s ambitions, nobler than any other work man can do.”
The life of contemplation is that which most suits communion with us. It is not indeed to supersede the life of action, but may be in some way combined with it.”
Imperator – a discarnate master

How then, does the advanced sadhak respond to statements like the following?
“Service is the coin of the spirit,” and “I know no religion except service?”
Silver Birch – a discarnate master

What use is it, my brothers, for a man to claim to have faith although he doesn’t do any good deeds? Can faith save him? If a brother or sister is naked and destitute of daily food, and one of you say to them, ‘Depart in peace, be warmed and filled,’ but you don’t give them what their bodies need, what use is it? Even so, faith, if accompanied by works, is dead.”
James “The Just,” stepbrother of Jesus 3: 14-17

“Service to man is service to God.”
Mahatma Gandhi

By meeting the needs of the deprived when such opportunities confront us, or when reasonably called upon to do so. But also by having the right priorities.

Masters are not primarily social reformers. Innumerable masters have come and gone, and none has been able to reform the world. The masters know goodness cannot be imposed on society. Remove restraints and penalties, and people revert to type. Governments cannot, by legislation, force men to love their neighbours. Moreover, we “cannot make the poor rich by making the rich poor.” Therefore, masters work the only sure way – from within receptive individuals – so advanced aspirants should work primarily on those units of humanity over which they have the most influence: themselves. Experience and karma will educate others.

Certainly we should be ‘good Samaritans.’ Love overcomes all. Charity, the expression of benevolence, touches the souls of both recipient and benefactor. But as far as possible we should draw the line at the point where our peace becomes disturbed unnecessarily. Our foremost duty is meditation, so we should try to avoid being drawn into activities which hinder our contemplation and meditation by preventing inner peace. If social injustice upsets us, we should try to turn our minds away from it and avoid any involvement beyond voting and charitable donations. This applies also to politics, including ashram politics. Those who are often hot under the collar about some or other policy decision, or unsatisfactory state of affairs; who take up the cudgels, have a bone to pick, an axe to grind, have, whether they realise it or not, values – and – attachments which are still very much of this physical world.

Paul Brunton: “The universe is full of problems.”
Sage: “Since you do not understand even your own self, how can you hope to understand the universe?”

A wise disciple knows that until he has made inner progress he cannot contribute to the solution: he is still part of the problem.

Devotee: “There are great men, public workers, who cannot solve the problem of the misery of the world.”
Ramana Maharishi: “They are ego-centred, and therefore their inability. If they remained in the Self they would be different.”
Devotee: “Why do the mahatmas not help?”
Maharishi: “How do you know they do not help? Public speeches, physical activity, and material help are all outweighed by the silence of the mahatmas. They accomplish more than the others.”

Advanced devotees, whose sadhana has progressed to being an inner one, are little concerned with fairness and justice for themselves. Such devotees might oppose gross abuse of others, but they are not crusaders. Their kingdom is not of this world, and they know it is enlightenment which prepares them to serve those whose suffering is, like all suffering, the effect of ignorance. So, God-realisation first, and the idea that being a do-gooder is the highest way to realisation is incorrect. Eradicate the cause, and symptoms disappear.

Sri Ramakrishna Paramhansa told the story of a pilgrim who reached Varanasi after a long and arduous journey. After a bath in the Ganga, he proceeded towards the temple for darshan of the Lord. Encountering beggars on the way, he felt duty-bound to engage in charity, which slowed him up considerably as he wended his way towards the temple. When, at long last, he reached the temple, it was after the last arathi at the end of the day, and he found the temple closed for the night. He was too late for darshan that day. In this story, darshan of the Lord implies God-realisation, and the close of the day, the end of a lifespan.

The masters do not, with misguided compassion, try to save the ignorant from experiencing the consequences of their folly. They don’t, for example, protect the population explosions of the unevolved masses, thus sparing them the lessons arising from over-breeding their way to destitution. Masters offer their advice, then stand back while cruel, unjust society works through its karma until, eventually, out of that society there arise souls who have become more amenable to the masters’ teachings. Such souls are then given physical service as their sadhana until they have become less egocentric and more compassionate by nature. Then it is no longer their duty to pro-actively be champions of the downtrodden or alleviators of self-inflicted suffering. The purpose of suffering is to impel souls to find a way out of suffering, and this is attained individually by spiritual evolution & enlightenment, not by trying to paint over the cracks in the fabric of society. Those souls who have learned through suffering and paid their dues, now meditate. In due course, karma will bring every soul to this level.

Very generally, by the law of affinity, those who are employed in the avowedly indispensable social services, of the kind which expose them to human conflict and danger while working among the rougher elements of society, tend to belong in strata of society similar to those in which they serve. Advanced, refined disciples, however, who have already graduated from those schools, should now steer clear of any involvement (and observation or entertainment) which intrudes on their peace of mind. It is not their duty to try to solve society’s problems, but to become qualified to leave forever a world which will never be perfect: to acquire that knowledge, having which, all else is known; to drink that water which, having drunk, they will never thirst again; to attain “peace which passeth understanding,” “that peace which the world cannot give.” So, they live harmlessly are charitable in non-involved ways and, avoiding politics and gossip, they are introspective, self-disciplined and self-vigilant. They read spiritually uplifting books and scriptures, and pray, do japa, contemplate and meditate. Their sadhana transcends the world. 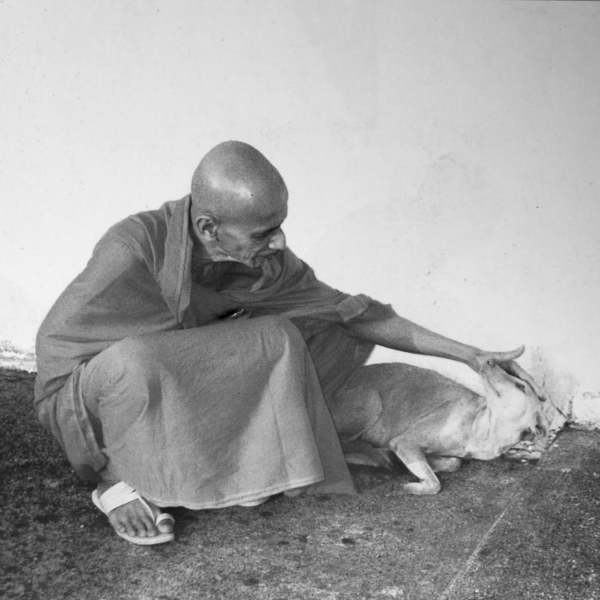