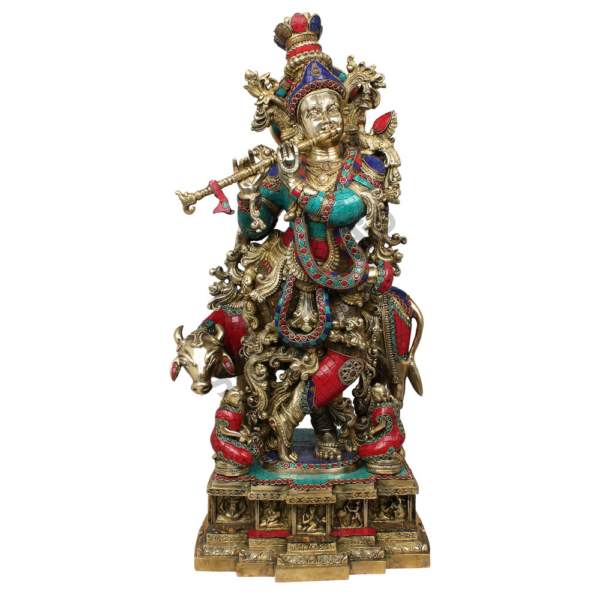 King Kamsa was a tyrannical autocrat who ruled in Mathura, the birthplace of Bhagavan Krishna. He loved his sister, Devaki, and on her wedding day he insisted on driving her and her husband Vasudeva in his royal carriage. All were filled with joy on that beautiful occasion.

Suddenly, however, Kamsa’s mood changed, and in his head he heard an invisible being whisper, “O foolish one, whom are you driving so merrily? Do you not know that the eighth issue of her womb will be the cause of your death?” On hearing this, Kamsa would have killed his sister on the spot, had not Vasudeva intervened. Falling on his knees for the sake of his wife, he reminded Kamsa that is was not Devaki, but her eighth child, who would be the cause of Kamsa’s demise. He pleaded with Kamsa to spare Devaki, and promised that, since kamsa feared her children, he would hand them all over to him.

In due course, children were born, and true to his word, Vasudeva sent word to Kamsa, who sent his servants to fetch the children, whom he killed with his own hands. When the birth of Devaki’s eighth child was approaching, Kamsa ordered Vasudeva and Devaki to be imprisoned, bound with the same chains.

As Devaki was about to give birth to the Avatar Krishna, she and Vasudeva swooned and, thus entranced, had a vision of a youth who greeted them as “Father and Mother”, and said, “Carry me, Father, to the house of your friend, Nanda, in Gokula. His wife, Yasoda, has just given birth to a daughter. Exchange me for that daughter. Bring her back to this prison, leaving me on the lap of Yasoda, who will be asleep. Nothing shall bar your path.” Then the youth vanished.

When Devaki and Vasudeva awoke, they saw a beautiful baby boy. Vasudeva embraced the chid and rose to leave for Gokula. On his straining against his chains, they fell away, and he hastened towards the door of the dungeon. Its massive doors had threefold locks, but he gave the door a push and it flew open, as did the gates of the prison. Crossing the river Yamuna to Gokula was also miraculously easy. Vasudeva reached Gokula and found the door of Nanda’s home open. He exchanged the babies as instructed and hurried back to Kamsa’s prison in Mathura, carrying Yasoda’s daughter. On his return, the prison doors slammed shut, the guards awoke, and Vasudeva found himself in chains again.

When King Kamsa came to the prison to kill the child who he thought had been born to Devaki, she revealed herself to be a goddess whom he would never be able to destroy.

Swami Venkatesananda has written, …”We are reminded that Maya was born at the same time, at the Lord’s own command. God and Maya manifested at the same time! It is even more mysterious that the Lord who immortalised Vasudeva in the holy mantra “Om Namo Bhagavate Vasudevaya” made Vasudeva exchange Him for Maya. These are worth deep contemplation. Then we shall realise the beautiful truth expressed by the royal sage Bhisma: “I salute the Lord who, as moha, (confusion) confuses beings by the bonds of affection and attachment, for the furtherance of this world.” All this is His play, which needs light and darkness. It is not our play, however.

The revered saint Harisharanandaji – one of Gurudev Sivananda’s senior disciples – used to remind us in his talks:

The indwelling, divine spark of the human soul;
The divine source of the power which ensures our evolution, enlightenment and liberation;
The divine source of the delusive cosmos: nama and rupa (Name and form), manifested simultaneously with the divine liberating power, at the moment when God says, “Let there be Light.”
The creation which, by its appearance, keeps the soul deluded, mistakenly identifying with form, and trapped in creation.
The liberating Word, Sound, Light, Shabd, Nada.
Asuras: the nescient attackers of liberating influences.
The initiate’s way to enlightenment & liberation (symbolised by the cow).
Custodian of the power of enlighten & liberate.
Faithful seekers and practitioners.
The ideal, successful, disciple and apostle of the Lord.

To represent the Son of God in the Bhagavad Gita (Song of God), its author chose a legendary, paramount king, who ruled Dwarka, on (and now submerged off) the coast of what is now Gujerat, and who was married to Queen Rukmini. There he was consulted by other chieftains, and arbitrated in their disputes.
As the divine inner voice of intuition, Krishna, portrayed symbolically as the charioteer of the Pandava general, Arjuna, urges Arjuna to engage in evolutionary effort, beginning with the onslaught on his lower nature (the true Jihad or Holy War) depicted in the Bhagavad Gita as the battle of Kurukshetra. He assures Arjuna of the eternal indestructability of life, instructs him in meditation, grants him a fleeting glimpse of cosmic perception, and leads him via Yoga towards God-realisation.

Hail to Bhagavan Vyasa, and to
Bhagavan Krishna,
Avatara of Hari;
Son of Devaki and Vasudeva; Mischievous child of Vrindavan;
Flute-playing consort of gopis; Husband of Rukmini; Beloved of Radha;
Counsellor of statesmen; Friend and adviser of Arjuna;
Defender of the Pandavas; Redeemer of the fallen;
Radiant Immortal Divinity within all.