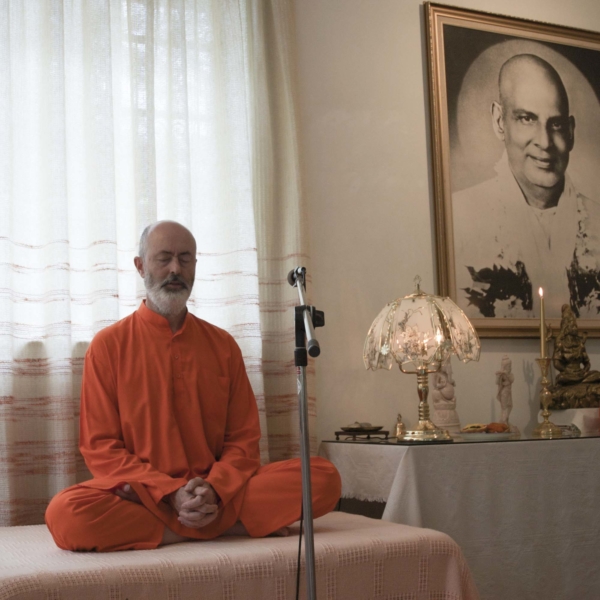 Sri Swami Isvaramayandandaji Saraswati Maharaj is a True Guru. Of this, his disciples, of which I am one, have no doubt.

My spiritual journey with my Guru began on the 17th January 1985 when I accompanied a friend to Sivananda School of Yoga in Johannesburg. At the very first satsang I attended, Swami Isvaramayanandaji delivered a discourse which opened up an inner world that I had long suspected existed, but knew not how to access it. I continued to attend, enthralled by the brilliance and clarity of his discourses but even more so, deeply comforted, at a difficult time of my life, by the wonderful peace of his presence.

Later that year, I became a resident at the ashram and have been blessed to walk in the footsteps of my Master ever since. Swamiji began practising Hatha Yoga and meditation at the age of seventeen and, being inclined to the way of the mystic, studied esoteric and metaphysical science under various teachers. He was invited to join the committee of Sivananda School of Yoga in 1982, became the Vice Chairman in 1983 and was asked to become its Principal in 1984. In 1988 he was initiated into the Holy Swami Order by H. H. Sri Chidanandaji Maharaj, President of the Divine Life Society of India.

Swamiji’s inspired, soul-stirring discourses attracted numerous discerning seekers to the Sivananda School of Yoga. Many of the serious aspirants, who flocked to listen to his teachings, recognised their true spiritual teacher in Swami Isvaramayanandaji and requested initiation as his disciples. For a long time, Swami resisted, I, and others, knowing our Master as only the soul can knew, persevered. Eventually Swamiji obeyed the inner prompting of a Higher Source and initiated some of us, always and only in the name of his Paramguru, Gurudev Sri Swami Sivananda.

We have not been disappointed. Our Guru’s uncannily accurate, intuitive guidance leads us ever deeper in the (not always comfortable!) truth about ourselves. He comforts and uplifts when we are facing difficulties, always encouraging, always understanding. He gives a little shove here, a helping hand there: he carries us when we are exhausted by our futile struggles against destiny.

Gently, surely, he guides us “from the unreal to the real, from darkness to light, and from death to immortality.” We are truly blessed as are you.